Last year saw some real innovation in smartwatches – here’s who has the best products so far in 2021.

The new Spade & Co Health Smartwatch was definitely the biggest upset of the year, and it changed a lot of our rankings around at the last minute. A lot of high-tech stuff is baked into the watch, with a simple and great design for both women and men. By selling directly to the consumer, Spade & Co is able to cut the middle man and sell a high-quality product at a very competitive price. In other words, you don’t pay for the brand, you just pay for the product.

The Spade & Co Health Smartwatch has the best reviews on the brand’s site, earning an average of 4.8 out of 5 possible stars from roughly 500 total smartwatch users.

To summarize, we picked the Spade & Co Health Smartwatch because it offers what most consumers expect from a smartwatch, including activity tracking and health monitoring at a very reasonable price. For people who are considering purchasing their first smartwatch, this smartwatch is a must-try.

UPDATE: It looks like there is a time-limited offer where you can get the Spade & Co Health Smartwatch for half the price. This could be a good deal to take advantage of while they have it.

"Love this watch. I use it to track my heart rate and sleep patterns. It is simple to set up. Great battery life. I would recommend this smartwatch." - Christine M.

"I bought this Spade Co watch because I really wanted to see if I would use the features before I spent $400 on an iWatch. The watch arrived in a few days and I'm very happy with the style and the functionality. Once paired with the app, this watch does just about everything that the iWatch does except the ability to use it as a phone. For the price, it's an amazing deal. It's very modern and sleek looking. The basic black strap is very comfortable and complements the black casing and face of the watch." - Dennis C.

"The arrived in 2 days and the packaging was really neat. Easy to put together and get going. It's a fantastic watch. I bought one for a friend first and she loves it so got a second one for myself!" - Paul A.

"My husband and I got these for Christmas. We're very happy with the smartwatch. Love the battery life. As a former Fitbit user, this smartwatch seems more accurate." - Sue W. 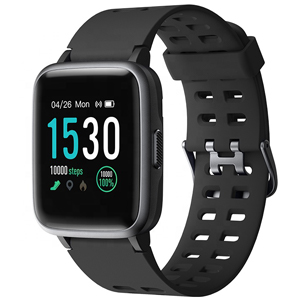